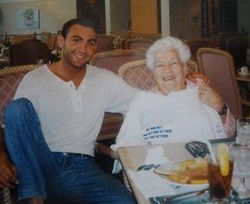 Greg & his no-nonsense Grandma were best friends. As more people took notice of his civic efforts, they also noticed the extent to which his Grandma influenced him. As a result, in the last decade of her otherwise quiet life, she found herself in the spotlight -- gracing covers of magazines like Senior News and The NonProfit Times.  Along the way, she insisted she was no different than the millions of other grandparents who impact those they love. She passed away on June 13, 2002 but still impacts him deeply to this day. ​The books based on their story tell the story of a young person who wants to change the world -- & the grandparent who changed his.  One of those books, The Silhouette Man, was recognized in Canada with the Wisdom Speaks honor -- given to a book that celebrates the unique wisdom of seniors. The books are utilized by schools, companies, nonprofit organizations & retirement communities around North America, including many which work with retired people in different capacities.  The books have been used extensively with seniors & those who serve seniors. The books also have been used repeatedly with intergenerational programs (i.e. one ordered copies for some of its supporters as well as dozens of students, another ordered copies for both students & seniors in the program).  Greg has been invited to speak or read at many events for older adults &/or those who serve older adults &/or intergenerational events. In some cases, he has served as 'Grandkid-in-Residence' at a community for older adults.  During the 2020 Pandemic, he has partnered with senior communities all around the U.S. on joint projects to support their residents.